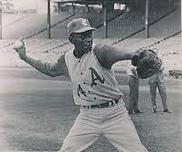 From the 1940s through to his death in 1973, my Dad always played baseball.  He was a catcher.  The Cleveland Indians (now Guardians) recruited him when he graduated from high school in 1948.  But he just had to play one last game with the guys before he left town.  He severely broke his wrist in that game, and the doctors said he could never play professionally.

But he kept playing in summertime leagues, always catching.  From the time I was born in 1954, summer always meant baseball.  Mom and I, and later my two brothers, went to most of his games.

Along the way, he broke the same wrist, in the same place, twice more.  Then Mom got mad every time he put on his spikes and picked up his mitt.

He used to tell a story about my meeting Satchel Paige.

Paige was probably the best pitcher who ever lived.  He spent most of his career in the Negro Leagues from the 1920s, and joined the Indians in 1948.  He bounced around to several teams, and finally retired from the Atlanta Braves at age 59 in 1965.  He passed away in 1982.

I was born in October 1954, so 1955 was my first baseball season.  Dad’s team often played against the remnants of the old Negro League teams.  Allegedly, some of those games were against Satchel Paige.

Dad’s biggest claim to fame was that he got a hit off of Paige.
After one game, the players, wives, etc. were all standing around chatting.  Dad said that Satchel picked me up out of the stroller and held me.  Dad was known for tall tales, aka lies, so after he was gone, I asked Mom.  She said it was true.  That could be.  Or Dad could have told Mom that some random guy was Satchel, and she would never know the difference.  He would absolutely do that.

I looked it up and Satchel had a hiatus from Major League Baseball between 1953 and 1955 and spent it barnstorming for games anywhere he could get them.  As he had played for both the Homestead Grays and Pittsburgh Crawfords in the Negro League, he knew people in Pittsburgh baseball.  Dad did too.

So logistically, it could be true.  Or not.
We’ll never know.

But don’t look back.  Something might be gaining on ya.