Republicans blame labor unions for every problem we face. It’s just another pathetic stunt to divide, conquer, and destroy the American middle class. Labor unions benefit every working person in America, whether they belong to a union or not.

They know that our schools don’t teach labor history or labor’s contributions to the economy. They know that most Americans believe what their teevees tell them. They do it because they want to thwart the unions’ push against the big corporate bucks that support their political campaigns. So let’s examine labor unions.

History of Labor Unions
A group of employees who combine to bargain collectively with their employer for wages, benefits, and working conditions form a labor union.

In the middle ages, artisans from the various skilled trades formed “guilds” to act for their common interests. They were stonemasons, carpenters, weavers, teamsters, and others. The old guilds gradually disbanded, but the idea didn’t die. Unions returned in the mid nineteenth century, during the Industrial Revolution. They grew for the next century, especially during the 1930s. By 1960, one-third of all American workers belonged to a union. Union membership declined from the late 1970s through the 1980s due to national political, economic, and social conditions. Now, only about 13% of working Americans belong to a union. You can trace the rise and fall of the American middle class with the rise and fall of labor union membership.

A union is built from the ground up. Individual members belong to local unions, usually organized by occupation. Each local’s members elect their officers. A union steward acts as liaison between the workers and management at each workplace. Locals belong to a national or international union, such as the United Steelworkers of America, or the American Federation of Teachers.  The national union assigns a number to each local, such as Ironworkers Local 3. Most national unions belong to associations such as the AFL-CIO, Change to Win, and the Industrial Workers of the World. Fifty-six individual unions, representing 10.5 million workers, belong to the AFL-CIO – the American Federation of Labor-Congress of Industrial Organizations.

Chambers of commerce, business owners’ associations, trade associations, et al actively promote business interests to the government and the public. Yet they refuse to acknowledge workers’ rights and often break the law to break the unions. Economics courses and business schools teach that workers’ labor is a product to be bought, sold, and treated no better than the furniture. No one questions the right and wisdom of business owners sticking together to support their interests, but many are outraged when employees do the same thing.  Unions represent the common interests of their members – and all workers – to the business owners, the government, and the public.

The 1935 National Labor Relations Act requires employers to recognize unions approved by a majority of employees. The two parties negotiate a contract to exchange work for wages and benefits.

Union Contracts
Working conditions are a vital element in any union contract. American labor unions fought for every workplace health and safety measure that you enjoy today. And employers fought against every one of them, including workers compensation benefits. The Triangle Shirtwaist Factory owners were engaged in a bitter dispute with workers about safety conditions in 1911 when their factory erupted in flames, killing 146 workers.

Despite the claims of critics, it is always possible to fire an incompetent or dishonest employee. No union contract anywhere prohibits firing a union worker. Every contract defines the conditions to discipline and fire employees, and procedures for doing so. This prevents employers from firing workers for arbitrary and unjust reasons. It works both ways. Every contract also contains a grievance procedure for employees who feel that they’ve been treated unfairly.

Some say that unions were necessary a century ago, but are now obsolete. Actually, labor unions benefit every working person in America every day, whether they belong to a union or not. Labor unions created the American middle class. They brought you the eight-hour day, and the five-day week. They gave you weekends. We take these things for granted, but none of them existed before the rise of the unions.

THEN THANK A UNION MEMBER.

Union members fought and died for the minimum wage, wage and hour laws, child labor restrictions, and workers’ rights and privacy on the job. According to the US Bureau of Labor Statistics, wages for union workers in all types of occupations are higher than for non-union workers. Union workers are better trained and less likely to be involved in workplace accidents and deaths. If you benefit from any of these things, THEN THANK A UNION MEMBER.

Today, our unions are still fighting to keep these benefits while organized business is trying to destroy them – and all working families. Republithugs and their corporate bosses want to return us all to the good old days without health and safety protection, but with unrestricted child labor, sweatshops, and robber barons. Unions made our lifestyle possible. If you want to keep it, then support our unions.

Many Americans are incredibly ignorant of labor unions’ history and value. I’ve met people who don’t know whether they belong to a union or not. Some are pretty sure they do belong, but don't know what the union’s name is. If unions want to survive, they must educate their own members. We know our schools won’t do it.

Join Us for the 2017 Labor Day Parade 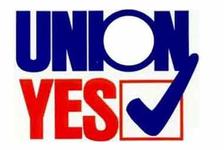