March for Our Lives Hits It Out of the Park
Abolish the NRA, not the Second Amendment
March 28, 2018

On Saturday, I joined 30,000 people in the local March for Our Lives in downtown Pittsburgh. I’ve been participating in demonstrations/marches/protests – on myriad social justice issues in Pittsburgh, Harrisburg, and Washington DC – for nearly 40 years.  This was one of the biggest, most moving, most powerful of all.  It was certainly the biggest in Pittsburgh.

About half of the crowd were young people, mostly high school and college students, along with younger children and quite a few strollers.  Many of the rest appeared to be their parents and other allies.
The rest of us were gray-haired protest veterans.

At the beginning of the march, I met a man, Silvano Gallego, who immigrated

to the US from Columbia twenty years ago.  He said he always wanted to

attend a public demonstration but was hesitant to do so.
But he loved this one.  He said “This is what’s good about America.

You couldn’t do this in Russia.”
I agree.

The politicians present, most of whom spoke, included Mayor Bill Peduto,

Every speaker agreed that “thoughts and prayers” don’t cut it.  We need real action.  We need to work with the sensible members of the NRA to make the change we want.  If our representatives in Washington and Harrisburg aren’t willing to change, then we must change them.
Voting is absolutely essential.

For the record, the students, here and in all of the cities, did a tremendous job of organizing the day.
Their parents can be very proud.  I look forward to much more from them.

WHAT DO THEY WANT?
Despite what the NRA and the gun goons would have you believe, no one wants to repeal the Second Amendment.  No one wants to take your guns.

Every organization wants only to make our lives safer.  They want common sense gun laws.
And they want to replace legislators who refuse to pass them.
And yes, I have read the mission statements of every one of the organizations listed in this article.

NATIONAL RIFLE ASSOCIATION
The NRA is the biggest opponent to sensible gun laws.

It was founded in 1871 to represent the interests of gun owners and provides many legitimate services for its members.
But the NRA is not an advocate for gun rights.

It does not represent the interests of gun owners.
It represents gun companies.

The companies make money when people buy guns.
Every restriction on gun ownership means fewer gun sales.
That's why they won't quit.
It's all about the money.
They’re sacrificing children for MONEY.
And they don’t feel badly about it because they are immoral.

For eight years, they convinced millions of Americans that Barack Obama and “the government” are coming for your guns by creating FEAR.  And they sold millions of guns.  There was even a shortage of ammunition. That makes them a terrorist organization.

If I hear one more time that the gun violence debate must stop being political I'm going to lose my mind.
The problem is political.
Therefore, the solution is political.
The NRA buys POLITICIANS.
They don't buy plumbers.

Wayne LaPierre and his disciples have been slandering, libeling, and defaming the MFOL organizers.
I won’t repeat their lies here.  I won’t give them any traction.
But if their cause was honorable, they wouldn’t need to spread lies.

That’s why we must eradicate the NRA.
And the gun sense movement isn’t saying that.
I am.

The many decent, rational NRA members need a new organization to represent them.
If anyone wants to get one started, I’ll be happy to help.

THE SECOND AMENDMENT
The Second Amendment is an anchor around the neck of this country.
It is literally killing people
We can keep its premise, but we must modify it.
It won’t be easy.
It will take time.
But it must be done. 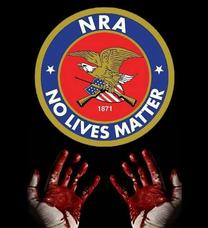