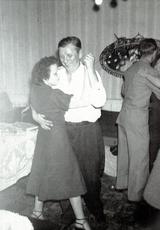 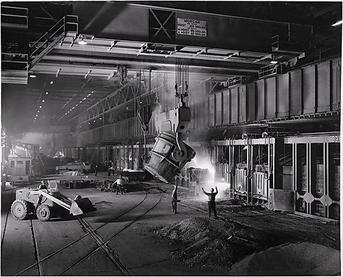 My Family and the 1952 Steel Strike

Every Pittsburgh family has multiple stories about the steel mills.  This is one of mine.

​My grandfather, Frank Gracy, began working as a laborer in the Jones and Laughlin Pittsburgh Works steel mill – also known as J&L Southside – in 1927.  Around 1940, he became a foreman, though he always strongly supported working people.  We all called him Pappap.

When the US entered World War II, he was exempt from the draft because the war effort needed his skills in the mill.  He won an award from the War Department for developing the first successful formula for making the armor plate for the tanks.  He was very proud that he, with his fourth-grade education, figured it out when all of the “college boy” metallurgists couldn’t do it.

Anyway, Pappap married Nana – Rose Vucic – in 1929.  They had five children – four daughters and a son.   The four girls came first; my mother was the second, and had married my father in 1951.  During the war, Nana was a Rosie the Riveter lady, but that’s another story.  On June 2, 1952, the United Steelworkers Union went on strike for higher wages.  It lasted 53 days.  That was the one where President Harry Truman nationalized the steel industry, but lost in the Supreme Court.

Meanwhile, Mom’s younger sister, Aunt Lois, met a guy.  Ken was in the army, stationed in Idaho, and about to be sent to Europe for a year.  Lois and Ken met through mutual friends when Ken came to Pittsburgh with an army buddy for a visit.  Ken was from Scranton.  Since he was stuck in the mill, Pappap hadn’t met Ken yet.  Lois announced that she and Ken were getting married within a week, and Pappap had to be at the church (St. Mary’s on Mt. Washington) to “give her away” – and the American steel industry had better not interfere.

So, on her nightly supply run to the back fence, Nana told Pappap that he

had to come home, or Lois would run away to get married.

Profanity ensued.  So, after all the bluster, Pappap arranged

to climb the fence, sneak out of the mill, put on a suit, and take his

daughter to her wedding on June 10.  The first time he met Ken was at

the altar.  The wedding ended and Pappap had to sneak back into the mill

without getting caught.  By the time the strike ended on July 24, Uncle Ken

was in England and Lois was pregnant.

Pappap and Uncle Ken didn’t meet again until 1953, after my cousin Ellen

Pappap is in lower right portion, with arms raised.

Aunt Lois and Uncle Ken were married for 40 years until her death in 1992.  He’s still with us.

They had six kids and a boatload of grandkids.  We heard that story many, many times.

And every time, Pappap glared at Ken and … insert profanity here.