​Our Founders Gave Us a Living Constitution
Strict construction is wishful thinking.
​July 30, 2019

The United States Constitution has been in the news more in the last twenty years than at any other time in two centuries.  The dispute boils down to whether the Constitution is a “living document”.

Conservatives claim to revere it nearly to the point of idolatry, insisting that Congress only has the power to take the actions expressly included in the text.  Liberals hold that our founders intended us to interpret the Constitution in the context of our times.

The Constitution is the set of rules by which our government operates.  Just as in any other activity – sports, business, schools, and families – life is only fair when everyone follows the rules.  In this case, the rules are flexible.

HISTORY
The founders had recently finished fomenting revolution.  They didn’t want to

be aristocrats.  They didn’t want to be gods. They wanted the government to

reflect and honor the will of the people.  They wrote it and they passed it along

to us.  They wanted the country to be what WE want to make it.

They wanted America’s face to be our choice.

James Madison wrote most of the text of the Constitution.  He started with a blank piece of paper and a pen.  The delegates debated, argued, and compromised.  There had never been anything like it before.  They could have included anything they wanted in it.  They chose to include some interesting passages.

AMENDING THE CONSTITUTION
Article V specifically outlines two methods for changing the Constitution – and only one requires Congressional action.  They made it difficult to amend, but they did make it possible.  The ability to change is the primary requirement for life.  If the founders didn’t want the Constitution to change, then they wouldn’t have included the process for changing it.

There is no such thing as an “informal” constitutional amendment.
We can't make this stuff up as we go along.  We either have rules or we don't.

Madison was quite capable of writing in great detail, as shown by the sections on the Electoral College and the election of senators.  Yet it contains several vague clauses.

DEFINING TERMS
Article I describes the powers and duties of Congress, and the powers forbidden to it.  Section 8, Clause 1 requires Congress to “. . . provide for the common Defence and general Welfare of the United States . . . .” Okay, slow down.  “Welfare” in this case does not mean public assistance benefits.  It means that Congress must do what is in the best interest of the country. And we leave that to the judgment of Congress.

The fourth amendment says The right of the people to be secure in their persons, houses, papers, and effects, against unreasonable searches and seizures, shall not be violated, and no Warrants shall issue, but upon probable cause, supported by Oath or affirmation, and particularly describing the place to be searched, and the persons or things to be seized.

Note that ”persons, houses, papers, and effects”.  Your effects are your stuff.  That’s all the stuff that you own which is not your person, house, or papers.  But we actually needed a Supreme Court decision to tell our police and prosecutors that your car, computer, briefcase, purse, bank safe deposit box, office, phone, and other stuff are your effects.  And that they can't seize or search them without a warrant.

FLEXIBILITY
The Constitution means what it says.  But you have to read all of the words.

Our founders chose to leave certain parts open to interpretation so that the nation could grow.  Without growth and change, everything dies.  Why would they waste their time writing a dead document, which would leave all of us stuck in the 18th century?  Don’t you think that the police should need a warrant to search your car, computer, or cell phone?

Some parts are contradictory – notably the Ninth and Tenth Amendments – but that’s why we have public debate, free speech, and a free press.  It’s often messy, but we can figure it out.

The United States of America was a great idea.  The Constitution is a great document.  In the end, 39 convention delegates signed it and every state ratified it. 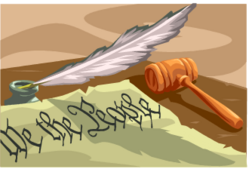