​The Government Can’t Cancel All Student Debt
It sounds great, but it’s not that easy.
​April 12, 2022


When Senator Bernie Sanders introduced a bill to cancel all outstanding student debt in 2019,  some Americans thought that their student debts would suddenly vanish.  Some still think that.  Don’t get too excited.  This is why language matters.

HISTORY
Student financial aid in the United States began with a private scholarship to Harvard University in 1643.  New York state founded the first government-related program in 1913.  There were many small-scale, targeted, public and private aid programs throughout the years.

The G.I. Bill was the first large-scale program, extending college opportunities to all white veterans of World War II.

The Higher Education Act of 1965 created most of the widely-available loan and grant programs we know today.

They’ve undergone some additions, deletions, and adjustments over the years.

DEBT STATUS
According to Education Data Initiative, nearly 44 million Americans owe a total of $1.75 trillion in student debt.  The federal and private loan average balance is more than $40,000 per person.  Student loan debt is now the second highest consumer debt category - behind only mortgage debt - and higher than both credit cards and auto loans.

Because of their massive debt, many college graduates delay other important life events, like buying houses and cars, getting married, starting families, and all of the other purchasing that goes along with those activities.  They’re back living with their aging baby boom parents.

WHAT CONGRESS IS DOING
Congress isn’t ignoring the issue.  At this writing, there are 203 bills

regarding student debt on the public record at Congress.gov.  You can

go there, search “student debt”, and read all of them.  But none have risen to the top of the heap with public and media attention yet.  There just isn’t an easy solution.

FEDERAL PUBLIC DEBT
This is the easy part.  The federal government can buy the debts from all government agencies that issue student loans, and then forgive those debts.  That would help a lot of people, but not everyone.  All of that is pretty straightforward.

The hard part is next.

PRIVATE DEBT
Private debt is a whole different story.  The government doesn’t own private debt.  Private banks do.
Every loan is based on a contract.  State’s can’t interfere in private contracts. (US Constitution, Article I, Section 10).

Those loans are the banks’ accounts receivable – their property, their assets.  Businesses can buy and sell assets at will.

So your bank can sell your loan to another entity, but they don’t have to.

The Constitution forbids the government from taking your private property unless, it  pays you “just compensation”. (Fifth Amendment)   That means market value.  So the government can not simply cancel all private debt.  It would have to withstand a long and complex process called eminent domain.

The government could buy all outstanding principal, accrued interest, and late fees with tax dollars, but It probably wouldn’t pay anything for future interest.  Some banks would sell; some wouldn’t, because they’d lose the opportunity to make millions on that interest.  So what happens if the banks don’t want to sell?  If the government tried to force the sale by eminent domain, they’d be in court for a LONG time.  Court battles will consume a whole bunch of money, and that interest would continue to accrue.

And because of their creative accounting and our tax loopholes, most banks would probably pay no taxes that sale.

Loan forgiveness is not automatic.  Student debtors with both public and private loans would have to apply for forgiveness.  If they don’t apply, they won’t get it.  And we all know people who won't do the paperwork.

LEGISLATIVE PROCESS
Sanders’ bill, S. 1947, died at the end of the 116th Congress, along with all other pending matters.  Now, the 117th Congress opened on January 3, 2021.  Once  new bills gain traction, the Senate Finance and the House Education and Labor Committees will review them.  They’ll decide whether to hold hearings, recommend floor votes, or ignore the bills completely.  The full House will most likely vote on it.  But since Democrats hold a tiny and weak Senate majority,  a bill may not ever make it out of committee.  If it did, the Republicans would surely filibuster it.  And it would die.

Even if it does get through the committees, there’s a snowball’s chance in Mt. Kilauea that any bill will pass intact.  There will be many amendments, but we don’t yet know what they’ll be.  We could end up with something that no one wants.

LOBBYING
This is where you come in.
If you want change, start lobbying for it.
Nothing moves in Washington until someone pushes it.

Lobbying is not what the media tells you it is.
Lobbying is the effort to convince local, state, and federal officials to support or oppose legislation and policies reflecting your positions.  Everyone can do it.  It doesn't cost a dime.
Learn how to lobby at the link below.

Start with the House and Senate committee members.  Those links are below too.

The biggest objection to canceling student debt comes from many people who have paid their debts without help.

You may have spent years repaying your student loans.  I did too.
No, you don’t get a refund.

Be a part of making life better for those who follow you.  Pay it forward.

OUR NEGLIGENT SCHOOLS
You would know all of this if you had attended a decent high school.  But American schools go to great lengths to make sure that they produce politically, financially, and socially ignorant citizens.  The last thing they want is for you to know how to influence your government.
So show them that you can, and will.
And that’s another topic for lobbying.

Contact Pat to get email notice of all new Community Matters articles.​ 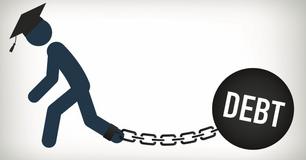