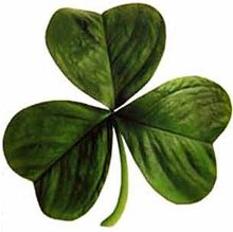 The Real St. Patrick’s Day
Its roots are political.

Just in case you're wondering.
Today, in honor of my Irish grandparents and family, this is why Americans celebrate St. Patrick's Day the way they do.

The British ruled Ireland for more than 400 years.  They treated the indigenous Irish horribly.  Food was always scarce, but beer and whiskey were plentiful because it's harder to foment revolution when you're drunk.   But the Brits underestimated the Irish ability to multitask.  We're quite adept at fighting under the influence.

During those 400 years, there was always a resistance of one sort or another.  People who were woke would pin a shamrock to the underside of their collars, or inside their jackets to identify each other.  That's where the term "wearin' of the green" comes from.

My grandparents and other relatives had to learn their own language, culture, and customs in secret because it was forbidden in British-occupied Ireland.  Slaveholders did the same thing to the enslaved in America, and the US government did it to Native Americans.  That's what cultural appropriation is.

My immigrant relatives personally told me about going hungry because hunting and fishing were reserved for the Brits, and they were only permitted to grow certain crops.  And that was in the 20th century.  That's why the 1840s potato famine was so devastating.  And that's why Irish cuisine is so bad.  They also had leprechaun stories, but that’s for another time.

My grandfather, Tom O’Malley, fought with the IRA and came over in the 1920s because the Brits put a price on his head.

There’s a lot more to that story, but that’s another thing too.

St. Patrick is honored for bringing Catholicism to Ireland.  According to legend, he drove the snakes out of the country.

Not really; that’s a metaphor for the devil.  In Ireland, SPD is a church day, not a party day.  Most people take the day off from work.  But church only takes an hour.  So, what does a good Irishman do when s/he's not at work or in church?

Go to the local pub, of course.

Irish who emigrated to America carried on that tradition, and people of other ethnicities picked it up.  Naturally, Americans have to make everything bigger and louder.  The Dublin SPD parade was created only to appease obnoxious American tourists.  My old-country relatives went to church and didn’t bother with the rest of it.  They drank, but they did that every day.  They called SPD “amateur day”.  I don’t bother much with the day either, but I do wear a shamrock.

So if I braid my hair and eat greens, or polka, belly-dance, hula, or whatever, I'm not stealing anything from you because you can still do those things.  That's how cultures evolve.
If you don't like it, then you need to get my permission before you wear green or drink beer this weekend.  Those things are political and cultural statements.

Enjoy the weekend, and be safe.