US Supreme Court Session Opens
The first Monday in October.


On October 1, the US Supreme Court opened its 229th annual session quietly, with no fanfare.  Hardly anyone noticed.

Federal law requires the court to open on the first Monday in October.  Each session usually ends in late June or early July.

It’s the least obtrusive, but often most powerful, of our three branches of government.

HISTORY
Our founders established the Supreme Court in Article III of the Constitution.  The Constitution gives Congress the power to establish any “inferior courts” it deems necessary.  Congress has done that, and we now have 94 US Federal District trial courts and 13 appeals courts.

The Constitution doesn’t specify how many justices will sit on the Supreme Court.  Congress set the number at five in 1789.  After that, Court membership changed several times, up to ten in 1863 and back down to nine in 1869, where it remains.

Thurgood Marshall took his place as the first Black justice in 1967.

Sandra Day O’Connor began her service as the first woman justice in 1981.

POWERS
The Supreme Court has the power to hear all cases

The Court has original jurisdiction – acts as a trial court – in all cases affecting Ambassadors and other public officials, and those in which a state is a party.  In all the other cases, the Supreme Court is an appeals court -  hearing arguments only, and not testimony or evidence – unless Congress makes specific exceptions.

The Constitution doesn’t give the Court the power of judicial review – to decide whether laws are constitutional or not.

Justices serve for life unless they die, resign, or are impeached and convicted.  Congress may impeach justices for “bad behavior” committed only while serving on the Court.  Behavior that occurred before taking the bench is not impeachable.  Samuel Chase was the only Supreme Court Justice to be impeached, in 1811.  Fourteen lower-court federal judges were impeached for a total of 19 offenses, including two for being inebriated while on the bench, three for perjury, and one for sexual assault.

In most cases, a Supreme Court hearing is not a trial.  Everything is based on the records and events of the original trial and appeals courts.  There are no witnesses and no jury.  Attorneys do not present any evidence.  The attorneys for the opposing parties argue their cases by referring to precedents set by prior similar cases and argue relevant constitutional issues.  After the statement, the justices question the  attorneys to clarify points or get more information.

The Court requires only a simple majority vote on a case.  Given the political composition, decisions for the past 30 years have usually been a 5-4 vote.  The Court issues its decision, called an opinion, several months after the hearing.  There may be several opinions in each case – majority, minority, dissenting, and concurring.

Most of the cases only affect the parties directly involved, but some cases have directly affected your life.

MAJOR CASES
Marbury v Madison, 1803
The  Court gave itself the power of judicial review.  And they’ve been using  it ever since.

Brown v Topeka Board of Education, 1954
The Court declared that racial segregation in schools was illegal and ordered all schools to integrate “with all deliberate speed”. This decision opened the door to further cases, which abolished legal racial segregation in all areas of public life – restaurants, transportation, hotels, etc.

Gideon v Florida, 1963
The court ruled that the government must provide attorneys in all criminal cases when the defendants can’t afford them.  Public Defenders offices were formed throughout the country.  Now, if you’re arrested, “you have the right to an attorney.”

Miranda v Arizona, 1966
The court required the police to inform arrested people of their rights, which already exist under the Constitution, before questioning because not knowing that you have a right is the same as not having the right.  The statement that the police read to arrested suspects is called the  “Miranda Warning”, for Ernesto Miranda, the plaintiff in the case.  This was not made up for TV cop shows.  The police really do have to read your rights to you if they arrest you.

Obergefell v Hodges, 2015
This case established marriage equality for all, regardless of gender, under the equal protection clause of the 14th amendment.  The Court's ruling affects only marriage licenses.  It means that if any state issues marriage licenses, then it must issue them to all couples who apply.  The states may not refuse licenses to same-sex couples.

They wanted a full court for show by opening day.  They didn’t get it, but they have it now.  They expect some major cases involving the president to arrive on the Court’s docket soon, and they want one more justice who’s willing to give the president tyrannical power to do whatever he wants, so they were in a great hurry to get it done.  Now we all have to live with it for the next 50 years, or until Kavanaugh commits impeachable offenses, whichever occurs first.

Our courts are our referees. We expect them to remain impartial and above political pressure.
I hope we can return to that status soon.

For more information:
Read the Constitution
US Supreme Court
The US Federal Court System
Impeachments of Federal Judges 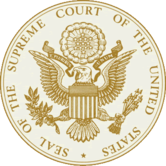