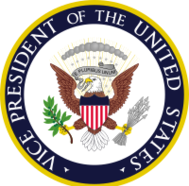 ​​What Does the Vice President Do?
The White House is trying to keep his salary a secret.
​May 7, 2019

On January 20, 2017, former Indiana Governor Mike Pence took the oath of office as the 48th vice president of the United States.  He brought his baggage as a strident LGBT civil rights and women’s choice opponent but, unlike Sarah Palin, at least he understands the job.

THE CONSTITUTION
There are two parts to the job of vice president.
The first part is the four duties required in the US Constitution.

That’s it.  There are no other official duties.

It doesn’t require much time.

The VP does not make policy or “run the Senate”.

president and can be impeached.

President Bill Clinton assigned Vice President Al Gore to lead the White House delegation to the international commission that developed the Internet and promoted its use throughout the country.

Vice President Dick Cheney took over many of President George W. Bush’s  duties and made the job his own.

With no legal authority, Cheney established many federal policies, particularly in foreign relations, the wars, and the environment.

In September 2001, Cheney bragged in an interview with the New York Times that he – not President Bush –

made all of the military and security decisions on September 11, 2001.

Vice President Joe Biden was significantly involved in many policy discussions under President Barack Obama, and guided many of Obama’s legislative initiatives through Congress.

Not all presidents take advantage of their vice presidents’ talents.  Many of our VPs have spent their days with little to do.

John Nance Garner, vice president during President Franklin Roosevelt’s first two terms, said that the job is “not worth a bucket of warm (spit)”.
The US has been without a vice president for 45 of its 230 years.

and holds a weekly lunch with Senate Republicans.

And for all of this, the vice president receives an annual salary of $243,500 and lives rent free, with her/his family, in the superintendent’s house at the US Naval Observatory in Washington, DC.

He has the same health insurance as all other federal employees.

When his term ends, he can receive a pension under the same terms as members of Congress. And no, it is not “full pay for life”.

But there’s more to this story.

When I tried to research the salary, I found many sites online, but they disagreed on the figure. So I called the White House.

The operator refused to connect me with Mike Pence’s office or with anyone who could answer the question.

I called my House member, Mike Doyle, but his staffer wasn’t sure.

He said there was some confusion about it when the last government shutdown ended, but he didn’t remember the result.

So I looked at the Office of Personnel Management site.

I called the OPM office, but was told I have to submit a written request to their Communications Office.

I did find an obscure mention of Donald Trump’s Executive Order 13819,

It’s on page 6, in Schedule 6, in the attachments to the Order.

In case you’re wondering, that Executive Order is standard procedure.

I did email OPM with my request and I submitted a written document request to OPM under the Freedom of Information Act.

I asked both for the information and asked why it's a secret.

I emailed OPM on May 7.  Today, May 8, I received a reply stating that the Vice President's salary is $246,900, according to a twelve-page memo from OPM Acting Director Margaret Weichert dated March 28, 2019.

The pay increase is retroactive to January 6, 2019, the first pay date in the year.

The PR staffer ignored my question as to why it's a secret.

​So I asked again.

I also sent a FOIA request to the White House.  Drama, drama, drama.