In 1848,  more than two hundred women, and about 60 men, traveled to upstate New York and met for two days to discuss their place in society.  They made one.  Women’s right to vote was their first goal.  They succeeded.

And they were just getting started.

Monday is the 49th annual National Women's Equality Day, in which we honor the 1920 ratification of the 19th amendment, which secured women's right to vote in the United States.  There’s still a lot of work to do.

HISTORY
The First Women’s Rights Convention in Seneca Falls, New York closed on July 20, 1848.  History remembers some of the participants’ names:  Elizabeth Cady Stanton, Lucretia Mott, Martha Wright, Mary Ann McClintock, Jane Hunt, and Frederick Douglass.
Their meeting created a Declaration of Sentiments of women’s rights.
Their courage created a social movement that endures, with many accomplishments to its credit.

It took 72 years to accomplish women’s suffrage, their primary goal.  People ranted and raved, moaned and wailed, and predicted all sorts of horrendous consequences if women (GAAASSPPP !!!) VOTED !.
None of those terrible things happened, and change came to America.
But it came slowly, and painfully, in fits and starts.

EQUAL RIGHTS AMENDMENT
The Equal Rights Amendment was the second step.  The first ERA was proposed to Congress in 1923, but Congress didn’t pass it until 1972.  For those who may have forgotten, or never knew, this is what it says:

Yep. That's all there is.

In the late 1970s, opponents mounted massive, expensive community organizing campaigns to keep this from happening. Conservatives promoted an absurd and morbid fear of the proposed ERA.  They told us that it would force women to serve in the military, and live in the same barracks as men.  They told us that prisons, public restrooms, and department store fitting rooms would all be unisex.  They told us that the sky would fall in upon us.

While the ERA has not yet been ratified by the required 38 state legislatures, it has been included in sixteen state constitutions for decades.  And gee.  None of that bad stuff happened.  Go figure.

And they will do it again. Yes, they want to prevent you, or your mothers, sisters, wives, daughters, and friends from an equal opportunity to contribute to our culture, our economy, and our lives.

MEANWHILE
It was a long and difficult road, but the movement leaders’ work, teaching, and support brought important legal rights to American women, and changed social attitudes:

But every single issue was a fight, or a lawsuit, or a civilly disobedient moment.

CURRENT STATUS
And we're still fighting.
One might ask whether we really still need the ERA now.
Aren’t all of those problems fixed?  Aren’t women equal by now?

No.  Recent progress in women's legal rights is not enough. Congress can repeal or change those laws at any time.  Only men's rights are guaranteed by the constitution.
And given the times, I want it in writing.

Thirty eight state legislatures must ratify any constitutional amendment.  Thirty five states ratified by the June 1982 deadline.  Two more have ratified since then.  There are efforts in Congress to rescind the deadline and accept the final three states’ votes.  We’ll see what happens.

Given the legislative emergencies brought to us by the deranged president, wars, economy, and Republican sabotage agenda, it will take an earthquake to move the ERA.   So put your earthquake shoes on and get moving.

Today, the Women’s Rights National Historical Park, on the site of the Seneca Falls convention, honors those women and their accomplishments.  It’s worth your time to visit if you’re nearby.
It moved me to tears.

time to start planning a celebration, and a rally to encourage all feminists

to move forward.  Look for information at the Women's Equality Day link

Stand up for your principles, even if you stand alone.
They did it.
You can do it too.
The First Women’s Rights Convention Lives on in Spirit.

The Equal Rights Amendment
Section 1.
Equality of rights under the law shall not be denied or abridged by the United States

Section 2.
The Congress shall have the power to enforce, by appropriate legislation,

he provisions of this article.

Section 3.
This amendment shall take effect two years after the date of ratification.​ 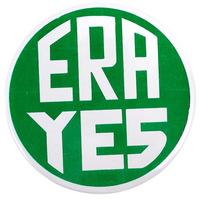