​Happy Constitution Day!
What is It Anyway?  And does it still matter?
​September 13, 2018

Happy Constitution Day!  On September 17, 1787 the United States Constitutional Convention delegates approved their draft of a new Constitution.  Now it’s 231 years later and Americans still don’t know how our government works because our schools teach it wrong.  But everyone keeps hollering at each other.

The U.S. Constitution has been in the news more in the last twenty years than at any time that I can remember.  Is torture legal?  Should we adopt a constitutional amendment banning same sex marriage?  How much power does the President have? Can your child’s school principal search her locker, or his backpack?  Who is your representative?  When can you vote for a new one?  What should we do about gun violence?  Few Americans can answer these questions.

WHERE IT CAME FROM
The founders’ first attempt at creating a government in 1781, the Articles of Confederation, didn’t work very well.  So, six years later, they tried again and gave us the United States Constitution.

intricate daily operating manual. The Constitution is an outline for

THE STRUCTURE
The Constitution contains three parts – the Preamble, the Articles, and the Amendments.

The Preamble, or introduction, lists the six purposes of the new government:

These are big things.  They don’t lend themselves to “small government”.

The seven articles of the body establish the federal government.
The first three articles create the three branches of our government, and define their powers and duties.

Amendments are changes, or additions, to the original text. There are 27 amendments. The first ten, the Bill of Rights, guarantee some of our individual rights. Several additional amendments adopted through the years expand on those rights. They include freedom of speech, press, religion, assembly, and to petition the government, own firearms, rights of the accused in criminal proceedings, rights of parties in civil proceedings, abolishing slavery, voting rights, civil rights, and requiring the states to guarantee those protections too.

The founders could have put anything they wanted into it. There were no limits, but there was much debate. In the end, they balanced the power between the federal government and the states, and divided the power among three branches. They created a system called checks and balances. They separated the powers so that no one in the government can gather too much power.

WHAT’S NOT IN IT
While in Washington D.C. on business a few years ago, I heard a man ask a Capitol Building tour guide where in the Constitution he can find Jesus.  He was aghast to learn that Jesus is not in the Constitution.  Nope.  Nowhere.

Because they haven't read it.
Now, this doesn’t mean that these things are illegal.  It means that the founders didn’t include them.

CONSTITUTIONAL SUPREMACY
One clause has served us particularly well.  Article VI states that the Constitution, all laws flowing from it, and all treaties adopted under its authority are the supreme law of our nation.  No state, city, county, school board, license clerk, or judge anywhere in the United States can override it.  We can only change it by amendment, which is a difficult process.

DOES IT STILL MATTER?
Surely it’s obsolete by now. Do we really still need it?  What’s the point?
People who ask this question usually want to start a fight or are pathetically ignorant.  It matters as long as the United States exists.  Americans still argue about it, file lawsuits about it, claim to love it, and swear to uphold it.  They accuse each other of violating it.  But most have never READ IT.

For better or worse, we still have Congress, a president, and courts.  We usually follow the rules for managing our government.  While various forces try to demolish our rights, we still manage to hold on.
We need it because it tells us how to run our government.

The founders didn’t want to be gods or dictators.  They wanted the country to be what we want it to be.

That’s why they used general language and gave us methods to change it. 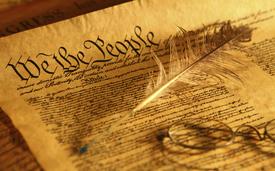