If you work for any business that has ever sold anything to a construction company or a construction worker, then you have personally benefited from infrastructure spending.

The condition of America’s roads, bridges, dams, ports, sewers, and other facilities is more than just ugly and annoying.

The American Society of Civil Engineers has issued a Report Card on America’s Infrastructure.  Overall, it received a D+ grade and the ASCE estimates that we need to spend $3.5 trillion in the next five years to bring our roads, bridges, dams, and other major structures up to an acceptable condition.  It’s a lot of money, but it would be well spent.

Infrastructure Spending Bills
In 2009, Congressional Republicans hijacked one-third of President Obama's $787 billion American Recovery and Reinvestment Act – "the stimulus" – for tax cuts.  That cut deeply into the planned $400 billion for infrastructure projects.  Then they whined that the stimulus didn't create enough jobs.  That's because tax cuts don't create jobs. Only consumer demand for products and services does that.

In February 2009, the White House announced plans to spend $53 billion on an

American Jobs Act to Congress.  But the regressive GOP stonewalled those bills, too.

of 2015, which would have allocated $1 trillion over five years to build, repair, and

It would have created or supported 13 million jobs while it fixed our broken stuff.

Today, nearly 800 infrastructure bills have been introduced to the 115th Congress, but fewer than 100 are being considered by the relevant committees.  And not one has become law.

Even the hyper-Republican U.S. Chamber of Commerce agrees that we must rebuild our infrastructure.  Former U.S. Transportation Secretary Ray LaHood remarked that “We are one big pothole.”  But Congressional Republicans don’t care.

The Construction Industry
Republicans love to ridicule infrastructure spending, whining that it produces only "temporary jobs", and benefits only construction workers. As usual, they are wrong. They don't believe this stuff. They want you to fall for it. According to the U.S. Bureau of Labor Statistics, construction industry employment ranges from six to nine million workers during a year, depending on demand, weather, and other factors.  Of course, every construction job is temporary. What do you think happens when the building, bridge, or road is finished?

“Construction worker” is not an occupation.  It is a collection of occupations in many different trades.  Think about what a building, bridge, or road looks like.  Engineers design the structure and supervise the construction.  Heavy equipment operators, ironworkers, laborers, carpenters, cement masons, electricians, plumbers, glaziers, and other trades build the project.  They are highly skilled and trained workers.  The process requires several years from concept to ribbon-cutting.

They work just like actors. They're hired for a particular project. When the project ends, the company might have another project for them, or not. Perhaps they can find work with another company. Sometimes, their unions can find work for them.  If not, they collect unemployment compensation until another job comes along. Sometimes that happens in a few days; sometimes it takes a few months. They routinely have six, seven, or more employers in a single year. Most of them are only paid when they work. There are no paid sick days, vacation days, or holidays. When bad weather closes a job, they aren't paid for that day. But when you string enough of those jobs together, you can have a career that supports a family with good wages and benefits.

How Infrastructure Spending Works
The Keynesian economic theory is one of the few classic economic principles that is based in reality. It states that government should spend more money during a recession to buy more of the things that government normally buys.

Those things are new and repaired roads, bridges, dams, harbors, levees, tunnels, buildings, schools, parking garages, subways, railways, parks, sewers, stadiums, airports, and other public facilities. That spending creates jobs for construction companies and workers. Those projects create demand for the supplies, equipment, tools, and other materials that they need for those projects. It creates demand for the trucking companies to ship them and the warehouses to store them. That creates jobs in all of those industries. If the companies supplying the construction industry have enough work, they can spend some of their revenue to hire more employees or to upgrade their own facilities. See, more demand, more jobs.

Then all of those workers have paychecks that they can spend on groceries, clothing, furniture, cars, houses, utilities, entertainment, appliances, restaurants, vacations, and all sorts of things. That creates demand in those industries. And that creates jobs. If those companies have enough work, they can spend some of their revenue to hire more employees or to upgrade their own facilities. See, more demand, more jobs. And government gets its new stuff built and its old stuff fixed. See. Everybody wins.

Republicans talk a lot about creating jobs, but they refuse to do the one thing that will actually make that happen.

Click here to get email notice of all new Community Matters articles. 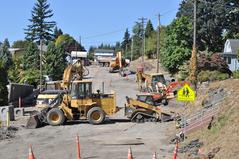