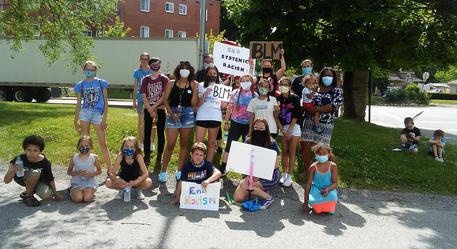 Ten Year Old Leads BLM March in His Hometown
If “All Lives Matter”, then protect Black people from being murdered by cops.
July 1, 2020

While COVID spread throughout the world, so did public outrage around yet another batch of cops murdering an innocent Black man.  The massive events in the big cities were predictable, but one led by a child in a small Pennsylvania town is a gem.

Four Minneapolis cops killed George Floyd on May 25, generating protests in all 50 US states and in 60 other countries on six continents.  The whole world is watching.

THE MARCH
I live in Brentwood, PA, a one-square-mile town

Brentwood too.  He saw news reports about Floyd’s

murder.  He said he felt bad about people dying

and asked his Mom, Nichole, if they could walk

around Brentwood with signs saying

“Black Lives Matter”.  She suggested that they

invite others to join them.
So on Wednesday June 24, we marched.

We were a small group, about 30 people, including several children, but we were loud.

We marched along Brownsville Road from the Brentwood Library to Giant Eagle – about a mile each way.

Two police cars remained nearby, ostensibly for our protection, but there were no incidents. Many drivers passed us and honked their horns in support.  One idiot flashed an obscene gesture because, yeah.

BRENTWOOD COP HISTORY
On October 12, 1995, two Brentwood cops, and two from other local towns, collaborated to kill Jonny Gammage,  a Black man who had the audacity to drive an expensive car through Brentwood.  The case gained national attention because Gammage’s cousin, Ray Seals, was a Pittsburgh Steeler and Seals owned the car.  The cops got away with it.

I’ve been marching for social justice for 40 years.  I took my then-five-year-old son to his first protest after Gammage’s death.  I have a T-shirt that says “I Can’t Believe I Still Have to Protest This Stuff”.  It’s fading from being washed so often.

I’ve lived in Brentwood for 28 years.  Most of the people are decent and kind.  But the Brentwood establishment is relentlessly and deliberately oblivious, negligent, and pathetic.  They’re a wretched excuse for public servants.

They told me they weren’t interested.  Then they falsified the borough council meeting minutes to cover it up.

Then the cops retaliated.   I got pornographic emails, threatening phone calls, and a line of cops in cars from Brentwood, Pittsburgh, Baldwin, and Whitehall outside my house, gunning their engines, threatening me.  They harassed my son at his job.  They filed false police reports.  But they didn’t break me.

There are hundreds of other instances of Brentwood cop corruption.  But borough officials are very good at hiding it.
And the public is afraid to come forward.
And so I march.

ALL POLITICS IS LOCAL
Thomas P. “Tip” O’Neill served in Congress from 1953 to 1987, with the last ten as Speaker of the House.

He dealt with every major issue in the US for 34 years and seven presidents:

Those are big things.  And throughout all of it, he’s best known for his line “All politics is local”.
All political acts are directly connected to local issues.

Your local officials set the tone for police interaction with residents and whether the police get away with murder.

Don’t think it can’t happen in your town.  It most certainly can.

You elect your local members of Congress – House and Senate – who deal with all of those big national and international issues listed above, and more.

Of course, they all overlap.  And all of those governing bodies collect and spend your tax dollars.

THE FUTURE
America’s troubles are human troubles.  They didn’t begin and won’t end with George Floyd’s murder.  As Elie Mystal says in The Nation Magazine’s article “The Outrage Must Not End”:

faced by black people.  But for things to get better for my kids,

people will have to maintain their energy and their demands for

police reform over the next few weeks.  And months.  And years.

When not leading marches, Dominic is a regular kid.

He hopes that everyone will learn how important Black lives are

and how wrong it is to be racist.

Nearly all marches include some children.  Teenagers organized the March for Our Lives.  This is the first I’ve attended that was organized by a young child.  I hope to see many more.

We may eliminate racism and murdering cops in our lifetime, but there will always be some form of injustice claiming our attention.   I hope we can look forward to many more activists like Dominic.
Good job, Nichole.

Be the change you wish to see in the world.
− Mahatma Gandhi –

FOR MORE INFORMATION
Brentwood Officials Are Still Covering Up Police Crime
There is No Such Thing as a Good Cop
Teach Your Children
The Chicks:  March March, video 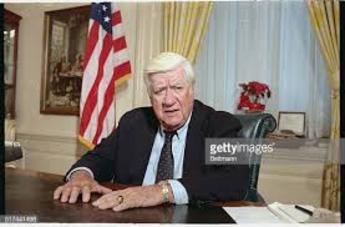