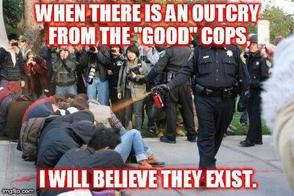 There is No Such Thing as a Good Cop
How to Prevent Police Crime
​June 3, 2020

Most claim that only “a few bad apples” are responsible.  They’re wrong.

From Rodney King to Freddie Gray to George Floyd  and beyond, evil cops are everywhere.

Cameras are everywhere too, displaying the cops’ crimes. The FBI doesn’t keep statistics on cop crime.

They don’t want you to see those numbers because FBI agents are cops too.

So now that the behemoth of American public opinion is awake again, what happens next?

ALL COPS ARE CRIMINALS
According to the United States Bureau of Labor Statistics, there were approximately 665,280 cops in the U.S. in May 2019.

If most of them are “good cops”, then at least 332,641 of those “good cops” would be condemning these atrocities.

Where are they?   Why haven’t we heard from them?

There are NO good cops on any police force.

Now, before you get all crazy yelling at me, read on.

And even if a cop has done none of those things, covering up the crimes of other cops is a crime.
ALL cops cover up cop crimes.  Yes, they do.  They brag about it.   Therefore, ALL cops are criminals.

And the public officials who cover up those cop crimes are also criminals.
The longer we hold onto the myth of the “good cop”, the longer it will take to solve these problems.

According to MappingPoliceViolence.com, there were only 27 days in 2019 when police didn’t kill someone.

In late May and early June, hundreds of thousands of Americans in dozens of cities protested the Minneapolis cops’ murder of George Floyd.  By the third day, pictures of cops kneeling on the ground “in solidarity” were everywhere.

No.  Kneeling for the cameras does not make you a good cop.

The next time those kneeling guys see their cop buddies choking a black man, or kneeling on one, or feeling up a woman whom they've stopped for speeding, or tasering, pepper spraying, or shooting a kid, they won't do a single thing about it.  They probably do it themselves.

DANGEROUS JOB
The Fraternal Order of Police is the largest police union in the U.S.  According to the FOP website, the union represents more than 330,000 cops.  Why isn’t the FOP condemning the cops who murder?

Whenever you bring it up, cops whine about how dangerous the job is.  As though that justifies murder.  Yes, policing is a difficult job.  But it’s not as difficult as the cops want you to believe.

According to the U.S. Bureau of Labor Statistics, the top ten most dangerous jobs in the United States in 2018 were:

Cops aren’t listed anywhere.  But when one of them gets hurt on the job, they whine and beg for money from strangers on the streets.  No other profession does that.  A police officer’s death on the job is a tragedy, but it is no more a tragedy than a fisherman’s, electrician’s, or ironworker’s.  And no one worries that those guys will murder them and get away with it.

My husband was a union ironworker for 34 years.

I never knew if he was coming home at the end of the day.  And there were a few times it was close.

​
SOLVING THE PROBLEM
At the very least, we must DEMAND that our cops not be criminals.
Citizen police review boards are puppets of the local cops.  Don’t waste your time.

There’s talk of requiring state or federal jurisdiction of these murders, rather than allowing the local cops and district attorneys to “investigate” their drinking buddies.  That’s fine, but it’s not enough.

There’s talk about better police training.  That’s a farce.   Anyone who thinks that will work is too stupid to be walking around loose.  All cops know what they’re not supposed to do.  They do it anyway because there are no consequences.

This is not a training issue.  This is a hiring issue.  It’s not rocket science.  When you hire defective people, you get defective employees.  Nothing will change until we demand that our cities stop hiring psychopaths to be cops.

If YOU are not going to stand up in public and demand a professional, adult, responsible police force, then you have no business whining about cops and you deserve what you get.  But I don’t.
The cops will keep getting away with murder as long as you let them get away with it.

So how do we solve it?  MAKE NOISE.

PROTESTS AND DEMONSTRATIONS
All social movements have a catalyst.  The women's movement had Seneca Falls.  The civil rights movement had Emmett Till.  The LGBT movement had Stonewall and Harvey Milk.  It looks like Ferguson, Staten Island, Cleveland, Baltimore, Minneapolis, Louisville,  and the rest are the catalysts for the Get-Decent-Cops movement.

There have been solidarity demonstrations in cities around the world.

Our time is now.  Make it count.

In past years, we've seen massive public demonstrations for Wisconsin public employees, the Occupy movement, immigration reform, economic justice, and criminal justice for victims of police brutality. Protests are routine again, but there are two generations who haven't learned how vital they are. Protests and demonstrations have been around for hundreds of years.

Protest are  necessary for social evolution.  They draw attention to vital issues.  No significant social, economic, or political change has happened anywhere in the world without protest and demonstration. History is made by those who show up.

Protests and demonstrations are not riots.   Riots are riots. If you don’t know the difference, watch the TV news.

Protests create attention, but protesting alone is not enough.  You must use that attention to convince your elected officials to make change.  Yes you can.  Contact your legislators soon after the event.  Tell them what you want and why you want it.

Before you go to a demonstration, find out who’s organizing it.  Legitimate groups will give you plenty of details – date, time, place, activities, purpose, speakers, etc.  Beware of notices that just tell you to show up in the middle of the street, with no more information.  See the link below for more safety information.

LOBBYING
The cops, your elected officials, the corporate media, and the Republicans who control our schools don't want you to know that lobbying is the ONLY thing that can stop this epidemic and restore our democracy.

That’s why they lie to you about what lobbying is.  "Giving money to legislators" is not lobbying.

Lobbying is the act of contacting local, state, and federal officials to discuss the issues that you care about, and convincing them to support legislation and policies reflecting your positions.  Legislators at all levels of government listen to corporate lobbyists because they are the only ones doing the talking.

If you want your representatives to listen to you, then start talking to them.  It doesn’t cost a dime.
Write, phone, fax, and email your elected officials.  Attend your local town council meetings.  Meet with your representatives in person.  Join an organization that’s working on the issues important to you.
Go to the link below for more details on how to lobby effectively.

RECORD THE POLICE
Keep your cool.  Use your camera.
The American Civil Liberties Union website contains a page which explains your constitutional right to record the police in action.  The ACLU also has free phone apps for eighteen states which will record incidents with just one touch of a button, and automatically forwards it to the ACLU for follow-up.  Then make that video public.

FILE COMPLAINTS
Yes, the legal system favors the cops.  But we still need to use it.  We must make them document every incident.  You can file complaints with the police agency that committed the crimes, your district attorney, and the US Justice Department's Civil Rights Division.  Force them to respond.  Use your state open records law to get information from them.  Keep copies of every piece of paper and records of every conversation you have with the people “investigating” your complaint.

Yes.  I have done these things in my community.  I witnessed cops committing crimes.  I reported it to the local officials in Brentwood, PA.  The police chief, mayor, and town council all ignored me because I stood alone.  Then they falsified the borough council meeting minutes.  Then the cops, along with others from the surrounding communities of Baldwin, Whitehall and the city of Pittsburgh, retaliated against me.   But I am the ONLY person in my town with the guts to do this.  Why am I still alone?
What are YOU doing about it in your town?

FOR MORE INFORMATION:
Read the Constitution

​Click here to get email notice of all new Community Matters articles.​