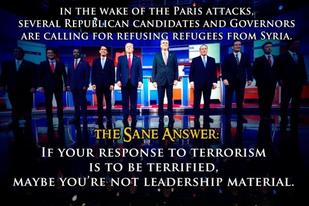 The American Terrorists
They’re All Around Us.
November 19, 2015

The terrorist’s goal is to create fear of “the other”, of some “evil”, in order to accumulate power, and to exercise control.  Who are these terrorists in our midst?  Let’s see.

Dictonary.com defines terror as intense, sharp, overmastering fear; an instance or cause of intense fear or anxiety; violence or threats of violence used for intimidation or coercion.  A terrorist is a person, usually a member of a group, who uses or advocates terrorism, and a person who terrorizes or frightens others.

How to Recognize an American Terrorist
The American Terrorists tell us that “the government” is our enemy, will squelch free speech, and is coming to take our guns. Believe me, if Barack Hussein Obama wanted your guns, he would have kicked down your front door by now, and you can do nothing to stop him.  He has more people, more guns, and bigger guns than you do.

They tell us that taxes, regulations, and the minimum wage will destroy every business in the United States – and every job with it.  Really.  Get a grip.  Tax cuts do not create jobs.  They never have.  They never will.  Look around.  They’ve been cutting taxes for 35 years.  And this is where it’s brought us.

They tell us that if the Equal Rights Amendment passes, "the government" will force all of us to use same-sex public restrooms.  If you live in Pennsylvania, YOU have been living with the state ERA since 1971.  When did you ever use a same-sex restroom?

They tell us that permitting LGBT people to marry will destroy our own marriages.
They tell us that education and educated people will harm you and your children.
But they really want to keep us stupid so we'll fall for their scams.

They tell us that socialism and communism are the opposites of democracy and freedom.
No.  They’re not.  Look it up.

They tell us that Social Security will be gone before we’re old enough to collect it.
Yet they want us to gamble our Social Security accounts on their stock market.
You do know that the game is always rigged in favor of the house, right?

They gave us the all-purpose color-coded scary list and the wicked WEAPONS OF MASS DESTRUCTION.

They tell us that illegal IMMIGRANTS are rapists, that they have left headless corpses in the Arizona desert, and that they collect barrels of welfare benefits.  That’s a pack of lies.

They tell us that we can’t allow refugees into the country because it’s too easy for them to get guns.  Yes, really.

They expect us to believe that Pittsburgh’s own Thomas Merton Center is a terrorist organization.  I’ve known many of the Merton folks for more than 30 years.  Nothing could be further from the truth.

They tell us that the bad guys want to take away our freedom, and that the only way to protect it is to give up our freedom.

They tell us that if someone else succeeds, then we will fail.
They cultivate xenophobia as a desirable character trait.

They want us to fear anything or anyone that is not just like them.  And for the first time, when we have a president who is different from the majority of Americans, they want us to FEAR him.  Sociologists call it “the other”.  They want us to believe that President Barack Hussein Obama, of the foreign father and the funny name, is not a "real" American, that he’s secretly a communist, Muslim, witch doctor, antichrist, Nazi.

So how do our “leaders” protect us from the terrorists?

Believe it or not, the idiot “security chief” at my son’s high school told me that I wasn’t allowed to take a picture of the building because “There are a lot of terrorists around here you know.”

Sadly, terrorists are real.
They surround us everywhere, every day.

The American Terrorists don’t believe any of it.  But they want us to believe it.  They focus on things that most people don’t understand, they offer a phony description, and then they try to make us afraid of it.  They count on the cumulative effect of these multiple fears.  They want to create such a complete sense of overwhelming panic and dread in our hearts and our minds that we will gladly sacrifice our freedom, privacy, jobs, friends, families, homes, neighborliness, common sense, and dignity for the “safety” that they promise.  And they do it all in the name of patriotism.

They convince us to act against our best interests.  They divide and conquer.  Usually, this results in a political or financial benefit for them.  Sometimes it’s just for entertainment.

So, who is telling you these things?  Who is making you afraid to live your own life?
Slow down.  Read the news reports.  Listen to the talking heads.  What are they saying?  Who are they?

Fortunately, we can check on their lies.  Everything they say, every claim they make, is verifiable.  Go to the source.  The greatest research tool ever devised by humans is literally staring you in the face right now.  The world of information is at your fingertips.  I’ve included some links here.

And don’t let the terrorists win.

"Those who would give up essential liberty, to purchase a little temporary safety
deserve neither liberty nor safety."
– Benjamin Franklin –